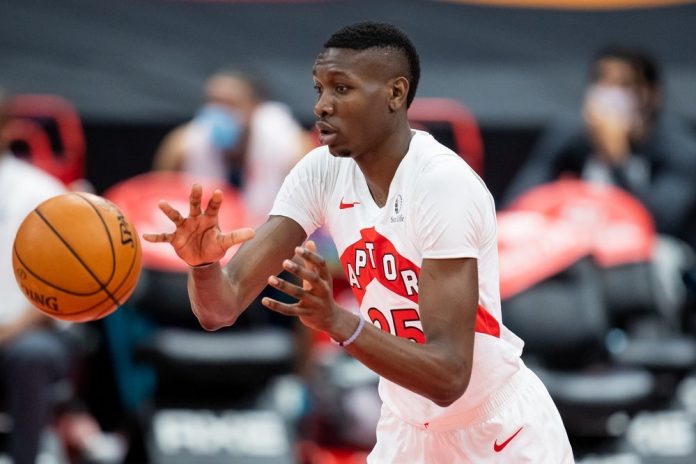 The start to the 2020-21 NBA season has looked quite different for Toronto Raptors fans compared to what they have come accustomed to that past few years. A perennial playoff team, and champions just two years ago, they are currently three games below .500 and clawing for a playoff spot nearly a third of the way through the season. However, even with the less than stellar opening, the emergence of Chris Boucher is one area that fans and the team can take a positive from.

With the departure of Marc Gasol to the Lakers and Serge Ibaka to the Clippers, the team had a lot of production in the frontcourt they needed to fill. They took a chance and re-signed Boucher, who had been with the team since 2018, to a two-year deal, even though he had played sparingly for them in the past.

That gamble has certainly seemed to pay off as he has been putting up career numbers in every category, and is playing at a  level few would have guessed before the season began. So while the Raptors may be sputtering, they have a piece that they know can play well if other aspects of the team’s performance improve.

With little known how he would fare given an increased role with the team, the fourth-year player was overlooked by the NBA fantasy league community before the season. On ESPN, he was averaged as the 23rd selected Center. He’s proved any doubt wrong though and is the 12th rated Center and one of the major gems of this year. A ‘gem‘ is a growing Fantasy league term. It refers to a player who’s getting big stats, but few notice. Those that did notice have to be extremely pleased with his play so far. Entering this year, his career-high averages were 6.6 points, 4.5 rebounds, .4 assists, and 1.0 blocks per game. For a player in his late 20s, it is not often that you develop into something else that late in your time in the league.

He has been an exception though, through the first 22 games of this year averaging 13.2 points, 6.2 rebounds, 1.0 assists, and 2.0 blocks per game. Career highs in every category for him, and even more impressive that he’s doing all this on only 22.5 minutes per game.

Players are now getting more and more aware of his impressive play. With his relatively low draft position, he was not rostered on too many teams. But currently, he’s rostered on 80.7% of teams in ESPN leagues. Safe to say at this point, he has become a hot commodity.

Another area where he adds value, especially for players in a roto league, is his incredible increase in three-point shooting. Over the first three years of his career, he was roughly a 33% shooter from three, taking just over 1 per game. This year he has upped that mark to 44.4% from deep and is launching 3.5 per game. For a center, he is maximizing his output for that category, which can make a big difference in a roto league.

Also, on ESPN he fills multiple positions. For roster flexibility purposes, he can be slotted in as a Power Forward or Center, which always helps when filling your roster with a backup player.

With more and more states legalizing sports gamblings, there are plenty of ways for interested bettors to make a wager on something like the ATS sports betting app. If you’re interested in betting on individual games against the spread, the Raptors might not be your top choice. To go along with their poor overall record, they are also only 10-14 against the spread.

As for their new backup center, he’s certainly moved up the chart on Sixth Man of the Year as well as Most Improved Player. Before the year, he was somewhat of a longshot for either of these awards, with his odds at +5000 for the Sixth Man Award and +2500 for the Most Improved Award.

Those who got in early had a nice value play, as he’s sitting at +1400 for Sixth Man and +2000 for Most Improved. While the Most Improved award might have more value, Christian Wood of the Rockets is a solid favorite at -125, which could be tough to overcome this far into the season. He’s 6th in odds for Sixth Man, which doesn’t have a clear frontrunner at this point.

This Raptor’s player definitely has a story that reminds you of the Hip-Hop music video for C.KHiD “Forward” or maybe Wiz Khalifa “Goodbye” (watch here).  He’s come in late in his career as an underdog and proved to the entire league he has the skillset to make a name for himself. Hopefully, with more minutes and experience he can expand on what he’s done already.

With only one-third of the season finished, the 11-13 Raptors have time to turn things around. They are 6-4 in their last ten games so they will be looking to build off that moving forward. Due to the pandemic, the NBA has implemented a one-year change to the playoff format, with the 7-10 seed in each conference having a play-in tournament to decide who gets the final two playoff seeds. So as the eighth seed right now, its extremely important for the team to get to the coveted sixth seed and avoid having to take part in the play-in tournament.

Chris Boucher will play a key role if they are to turn around their season and make a push in the regular season and playoffs. With more time he can hope to learn his craft and get even better.

Path of Exile: An Introduction to the Harvest Economy

EVERYTHING TO KNOW ABOUT WOW – WORLD OF WARCRAFT CLASSIC

10 Best Of Horror Games For Android

Shipping Services to the United States at no hassles with Shipwaves